In the Charterhouse 9th & 10th June Collector’s auction there is a group of WWII medals awarded to a teenage Apprentice Seaman for bravery at sea.

“As an apprentice he was under training and yet ended up taking command of the situation despite there being officers about.” Commented Richard Bromell. “The market for medals and militaria remains strong and we expect this group to sell towards £1,000.” 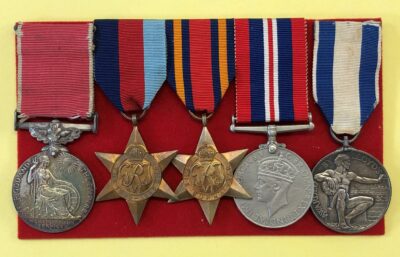 Apprentice Ian Alastair Clark was born in South Africa in 1924. He joined up as an apprentice in 1941 aged just 17. In 1942 he made his first full voyage on the Congella. In 1943 the Congella was attacked and sunk by a Japanese submarine. The Master was mortally wounded and pinned down by debris and issued the order to abandon ship which was on fire. Apprentice Clark, aged 18, stood by the dying Master rendering what help he could.

As one of the last to abandon ship he took charge of a lifeboat which had been damaged. With 29 other survivors the boat needed constant bailing to keep afloat. After 4 days and 180 miles of sailing they were spotted by two Catalina aircraft which landed in rough seas and rescued them.

For his action, Clark was awarded a British Empire Medal and also a rare Lloyd’s Medal for Bravery at Sea. Maybe this action put Mr Clark off a life at sea as after the war as he only took one further trip by sea, when he returned home to South Africa, for life ashore.

Charterhouse are now accepting further entries for this auction in June with medals, militaria, coins, stamps, model cars, trains & toys, and also for their next specialist classic & vintage car and motorcycle auctions.

Richard Bromell and the team at Charterhouse can be contacted for advice and valuations on single items and collections at The Long Street Salerooms, Sherborne 01935 812277 or via info@charterhouse-auction.com

The group of medals awarded to Apprentice Clark being sold by Charterhouse £600-1,000