A small box of coins, found in a garage as the owner was moving house, cover some 2,000 years of minted coins are entered in to the Charterhouse auction of coins, medals, stamps and collector’s items on 2nd & 3rd December an could sell for up to £1,000.

“Garages are not normally the hunting ground for finding coins but this is not the first time I have found a box of coins lurking amongst old cans of oil and paint.” Commented Richard Bromell. “The owner was downsizing, a common complaint, and took advantage of our free home visit valuation service and only brought the coins out as an afterthought thinking they had little value.” 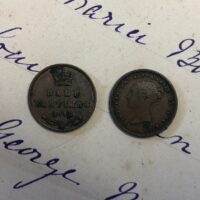 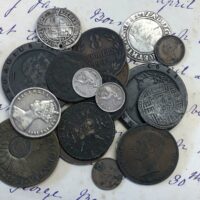 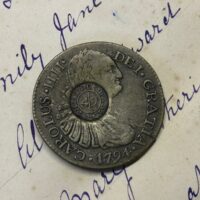 Coins in the little wooden box date from the Roman times through to the late 19th century. They include copper, bronze and silver coins of all denominations. Some of the smallest coins are a group of half farthings from the early 1940’s. In old money, a farthing was a quarter of a penny, with a half farthing being worth an eighth of a penny.

“The half farthings were originally minted for use in Ceylon and became legal tender in the United Kingdom in 1842.” Continued Richard Bromell. “However, I’m not quite sure what an eighth of a penny would have bought you back then, quite probably not a lot!”

Also hidden away in the box, is an Edward I hammered silver cross penny. Dating to circa 1300, it has had quite a hard a life surviving in poor condition and with a hole drilled through it to make it into a pendant. Other hammer silvered coins date to the reign of Elizabeth I (1558-1603) and include a shilling and a sixpence.

Moving forward to the late 18th century and there is a counterfeit (a more polite term for a fake) 1794 Spanish Dollar. This coin should be made from silver but the one at Charterhouse is made from brass. However, it is still an interesting coin as it has a Scottish countermark for the Thistle Bank noting a denomination of 4 shillings and 9 pence. Despite being a fake, it is still of interest to collectors and estimated at £200-400.

From the 19th century are a group of Georgian and Victorian coins. Here there is an assortment of crowns, florins, pennies and other coins all of which are included in the Charterhouse auction.

Charterhouse are now accepting further entries for this auction of coins, stamps, medals, and collectors’ items in December, followed by pictures and books in January and their next specialist auctions of classic and vintage cars and motorcycles both in March at the prestigious Haynes International Motor Museum.

Richard Bromell and the team at Charterhouse can be contacted for advice and valuations or to arrange a free home visit at The Long Street Salerooms, Sherborne 01935 812277 info@charterhouse-auction.com

Selection of the coins in the box