“Having been married for just shy of 30 years, paintings and art are one of the points which Mrs B and I do not always agree on.” Commented Richard Bromell. “Over the decades she has generally been tolerant of me buying art at auction but every so often I have to re-offer the picture back in the salerooms as no means no!”

First up there is an Italian Old Master drawing attributed to Jacopo Chimenti, known as Jacopo da Empoli. Born in Florence 1554 he had a long life and died in 1640. The brown ink, pen and wash drawing depicts the Madonna and Child appearing to Saints and is estimated at £1,000-2,000.

Moving forward to the late 20th century, and estimated to sell for twice as much, is an oil painting by Cecil Kennedy. Like Jacopo, Cecil lived a long live from 1905 to 1997. He is known for his highly detailed paintings of flowers and the Charterhouse picture does not disappoint. Painted with a vase of flowers on a marble ledge the flowers are lifelike, as is the little Ladybird also painted climbing up the marble edge. 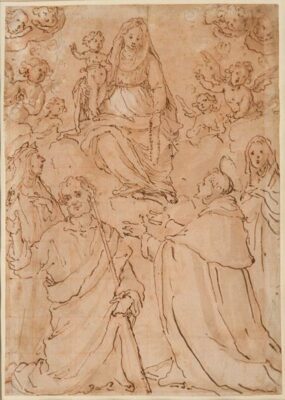