A Chinese porcelain bowl, which was used by an Admiral for years as a place to keep his keys safe in, is estimated at £8,000 when it goes under the Charterhouse hammer in their specialist sale of Asian Art on 8th April.

“I have seen and sold items which have been used as doorstops which, unbeknown to their owners, turned out to be valuable, but have never some across an item worth thousands of pounds which has been used as a place to keep keys safe” Commented Richard Bromell. 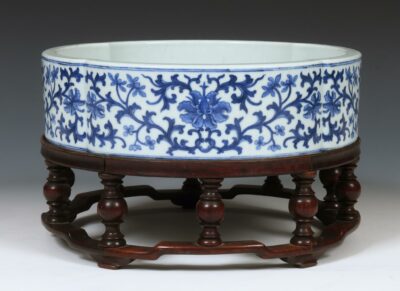 The bowl has been owned by a retired Admiral who passed away last year. It was inherited from a family member who was in China in the early 20th century. Whilst the bowl was admired, the Admiral did not attach any great value to it and used it daily for many years as a safe place to keep his keys.

Discovered by Charterhouse whilst carrying out the probate valuation after the Admiral passed away the family were surprised to learn the bowl is worth thousands of pounds. Once a grant of probate had been obtained Charterhouse were instructed to remove items surplus to family needs and entered the bowl into their specialist sale

Charterhouse are now taking entries for their busy programme of specialist auctions in April with automobilia, Asian Art, pictures, sporting items and books followed by silver, jewellery, watches, with wine, port & whisky in May.

Richard Bromell and the team at Charterhouse can be contacted for advice and valuations on single items and collections at The Long Street Salerooms, Sherborne 01935 812277 or info@charterhouse-auction.com