A rare group of medals, dating back to the Boer War are included in the Charterhouse two day collectors auction on the 2nd & 3rd December.

“The market for medals continues to be strong, aided by Google being an excellent platform to research the history and live internet bidding at the auction with a global reach for collectors” Commented Richard Bromell. 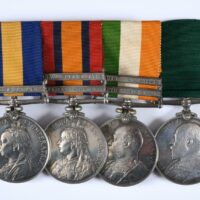 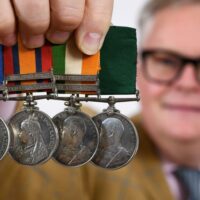 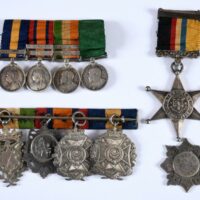 This is the first time the medals have been offered for sale on the open market and come directly from a descendant of the recipient.

However, what makes the medals particularly interesting is a bar on the Queens South Africa medal which reads “Defence of Kimberley”. Kimberley

Kimberley was a diamond mining town which the Boers attacked in October 1899. Although ill prepared, the defenders of Kimberley organised an effective improvised defence that was able to prevent it from being taken. The 124 day siege lasted until 15th February when they were relieved by a cavalry division.

Charterhouse are now accepting further entries for their auctions of coins, medals, stamps and collectors’ items in December, followed by pictures and books in January and also a special auction of automobilia also in January.

Richard Bromell and the team at Charterhouse can be contacted for advice and valuations or to arrange a free home visit at The Long Street Salerooms, Sherborne 01935 812277 info@charterhouse-auction.com.

First time on the open market – the medals awarded to Captain Banham who faced the Boers in the Siege of Kimberley, estimated to sell for £1,000 in the Charterhouse auction in December

Richard Bromell with the medals