A collection of Doulton from a West Country farmhouse is included in the Charterhouse two day 8th & 9th July auction.

“Doulton originally produced sanitary wares such as waste pipes. The income this generated enabled them to branch out with a studio making decorative items in Lambeth.” Commented Richard Bromell. “Although there is little demand for old Doulton pottery pipes at auction today, there is still good demand for the Lambeth studio wares and we expect plenty of collectors bidding online and in the salerooms at the auction.”

Star lot from the farmhouse collection are a large pair of vases. They are decorated herds of deer by one of the most sought after Doulton Lambeth decorators Hannah Barlow. At 47 cm high they are estimated at £1,000-2,000. 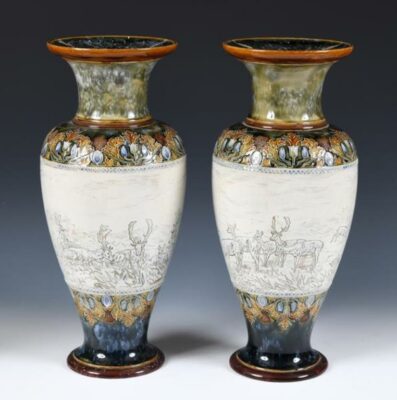 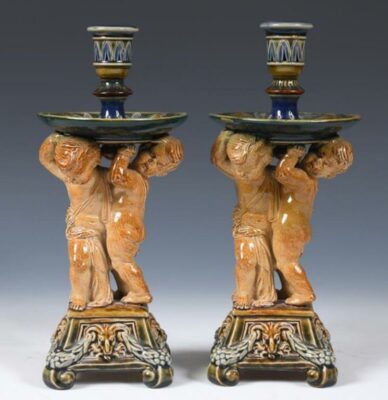 With Hannah Barlow being sought after for her charming animal decoration, George Tinworth is well known for his vases, jugs and humorous pieces, with a pair of vases in the Charterhouse auction from the collection. Decorated seaweed in a stylised form, one is chipped and they are estimated at £200-400.

However, perhaps one of the more unusual lots are a pair of candlesticks. With wide drip pans the columns are in the form of two putto and are also estimated at £200-400.

Other items in the collection are estimated to sell from 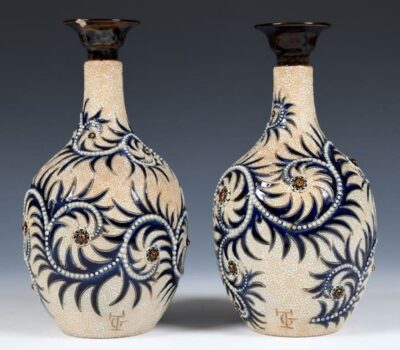 just £50 with the collection overall valued at thousands of pounds.