A group of Chinese censers are estimated to sell for thousands of pounds in the Charterhouse specialist auction of Asian Art on Thursday 18th April.

“The Chinese bronze incense burners were just used as decoration in the owner’s house rather than being as they were designed.” Commented Richard Bromell. “Which was just as well with there being four incense burners in one room they would have certainly created quite a strong smell.”

Chinese incense burners have been around for over 2,000 years. They are used for burning incense which would perfume clothes, bed clothes and even kill insects and were made in a number of materials including jade, agate and bronze such as the ones entered into this Charterhouse auction.

The incense burners were acquired by an ancestor of the owner. Towards the end of the 19th century the family worked in the consular service in China and would have been acquired then. Moving forward to 2019 this is the first time they have been offered for sale in over 120 years.

The owner, who lives near Dorchester, took advantage of the home visit service Charterhouse offers clients looking to enter items into their range specialist antique and collector’s auctions.

Entered into the Charterhouse April Asian Art auction on Thursday 18th April, the group of four Chinese censers are estimated from £100 to £1,500, which pleasantly surprised the owner.

A Chinese bronze incense burner in the form of four peaches £800-1,200

A Chinese censer and cover, with unusual rat handles, and associated stand £100-150 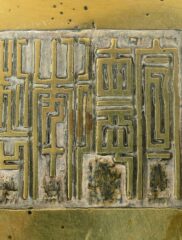