A 1954 FIFA World Cup gentleman’s wristwatch, presented to Jimmy Trotter, could sell for £1,200 when it goes under the Charterhouse hammer in their auction on Thursday 6th May.

“All the England players and staff were given a Movado wristwatch for the 1954 FIFA World Cup, with this one being presented to Jimmy Trotter who was a trainer”. Commented Richard Bromell. “Anything relating to a FIFA World Cup is interesting to collectors and to be able to put a name to such a presentation watch certainly adds value.”

Jimmy Trotter was born in County Durham in 1899 and served with the Royal Garrison Artillery during the First World War .Professionally he played football for Bury, Sheffield Wednesday, Torquay United and Watford. Whilst at Sheffield Wednesday in 1934 he scored 109 goals in 154 League matches.

Sadly he retired from playing football, due to an injury, in the 1932/33 season. After this, he went on to become a trainer and then manager for Charlton Athletic and in addition was a trainer for the 1954 England World Cup team.

Jimmy Trotter passed away on 17th April 1984 and the watch was given to a family friend.

Now, 37 years later, the owner decided to have the watch valued and took it to Charterhouse Auctioneers in Sherborne on one of their specialist valuation days. Here, he was pleased to hear it estimated at £800-1,200 and entered the watch into their three day May 5th – 7th auction where it will be sold on the Thursday 6th.

Items for auction can be delivered directly to The Long Street Salerooms, Sherborne or call Richard and the Charterhouse team on 01935 812277. Alternatively email photographs of your items for valuation on info@charterhouse-auction.com 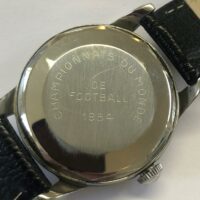 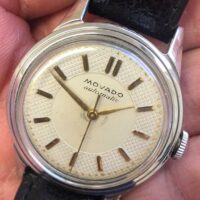 1954 FIFA World Cup Watch presented to England Trainer Jimmy Trotter £800-1,200 in the Charterhouse auction on 6th May in Sherborne